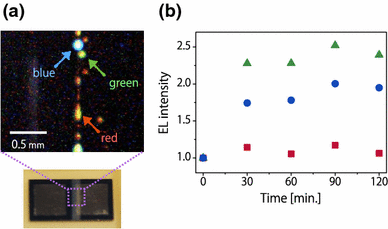 We developed a visible silicon light-emitting diode (Si-LED) with a lateral p-n homojunction using dressed-photon-phonon (DPP)-assisted annealing. The lateral p-n homojunction was fabricated in order to decrease the absorption loss inherent in light emission with a photon energy higher than the band-gap energy of the material. The fabricated Si-LED emitted light in the entire visible range, including the three primary colors. The light extraction efficiency of the Si-LED was estimated to be 7.8 times higher than that of a conventional LED structure with a vertical p-n homojunction. Owing to the efficient light extraction, we clearly observed two novel features in the electroluminescence (EL) spectrum: a nonlinear increase in the EL intensity with the injected forward current, and an emission peak at 2.7 eV, at which there is no singular point in the electronic structure. From these features, we concluded that the EL from the Si-LED originated from the phonon-assisted radiative recombination of carriers with much higher energy than that of the bottom of the conduction band, via DPPs.

Directions to Lab
No. 8 in Campus map